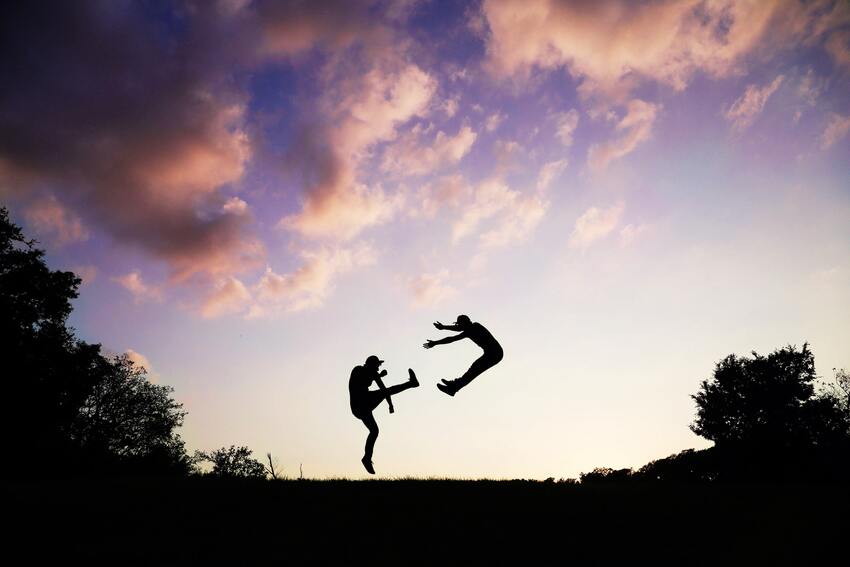 I have studied martial arts off and on since my childhood.   There have been breaks in between as my life has taken me all over North America.   I have been out of formal training for a year now since my doctoral and work schedules made it extremely difficult to train on any sort of formal basis.  Over the past few weeks I have decided to resume my training.  For the time being I am doing this on my own but it looks like *knock on wood* that I will have the time to enroll with the karate club at Michigan State University. I want to start competing again so this is key for me.

This past week I decided to work off the rust on my katas.  A brief description of kata provided at the end of this blog.  Scroll all the way down right now if you need to.  Anyways, I was amazed at how I retained so much of and after a few sessions I had progressed through 9 of the 15 katas I need to know for my black belt.  I was feeling great until I got to kanku dai.  Kanku dai is a bit of a different type of form.  It involves going down to the ground, jump kicks, and some move sets that are a little different.  It is challenging but not overly difficult.  For some reason though, I couldn’t get it right to save my life.  I looked at various youtube videos and a visual map of the kata but it just wasn’t coming.  It was as if I had never learned that form at all.  Rather than give up, however, I decided to keep working at it.  I put practicing everything else on hold: this week kanku dai was my sole objective.

Progress seemed painfully slow since I decided to relearn the form one move at a time.  I would see what step or move one was and practice it.  When I felt I was ready I moved on to the next step or move.  From there I would go back and practice the first move, the second move, and then go on to learning the third.  Once I was confident in that I would go back to the start and do moves one, two, and three before learning move four.  I think you get the idea of how I went about this.  I am not the most patient person at times so learning it this way drove me crazy.  I kept at it.  I practiced during odd times in the day, in the elevator at work (I can perform kata anywhere), and added extra repetitions to my workout at home.

The whole process has reminded me how important it is to break things down into manageable steps.  That is the best and most realistic way of achieving our goals.  Sure some people attain instant success but those cases are not the norm by any means.  I am reminded of a college friend of mine who always talked about wanting to become a musician.  Let’s call him Gary.  He worked very hard at writing his own songs and even taught himself to play guitar decently in a short period of time.  He was off to a great start but that’s where his progress ended.  Gary loved his music but did not want to get a band together or play at small bars, fairs, birthday parties, etc.  He did not want to tour.  Occasionally he would sing at a karaoke night (as a patron of the bar not as formal entertainment FYI) but other than that he never had the chance to sharpen his skills.  He scraped together some money to cut a few demos and was hoping to shop the demo around to the record labels.  Gary’s plan was to sit back and let the agencies come to him, offer him a developmental deal, and live life as a musician without the struggles that most artists go through before they make it big (if they make it big).  Needless to say the record companies never found him and the last I heard his music dreams did not go far.  It is a shame because he had a nice voice and great charisma.

Pursuing instant gratification usually leads to dissatisfaction. Success if built on a bed of effort, sacrifice, and constant improvement.  A little luck or a few connections here and there does not hurt either.  It is a harder road that can test your patience but in the end you are better for having taken it.

Breaking it down is not enough though.  We have to celebrate our small victories along the way.  When I finished the first 25% of the kata on my own and fairly strongly, I gave myself a pat on the back.  I no longer had to worry about getting that part right and I could now focus on the next part of the form.  As I “mastered” the beginning of kanku dai I increased my expectations.  I knew the moves by heart, therefore I expected myself to do them stronger and faster than before.  When I became familiar with the first half of the kata I did the same thing.  We have consistently  to raise the bar during our journey.  Celebrate the small victories but don’t rest on your laurels.  Push yourself to the max, eat your greens and don’t do drugs,  I think I just overdosed on cliches!

I think one cliche sums up my point best: divide and conquer.   Trying to do it all can just be too overwhelming and not produce quality  results.  Breaking it down means better mastery and in the long run that translates into a lifetime of success.  Now if you’ll excuse me, I have get back to kanku dai.  It’s far from perfect but I am getting better…one move at a time.

*Dr. Paul Artale is a motivational, speaker, author, and coach who helps people and organizations break through challenges and achieve to performance. For more information visit www.paulartale.com

Kata is an essential component to most traditional martial arts.  For those who don’t know, kata (also called forms) is a series of choreographed moves and stances that a practitioner does on their own.  It is a lot like a solo dance routine (except this one is generally a little more fierce and involves yelling).  Knowing you kata is also an essential step in getting your next belt and developing as a karate practitioner.